Evidence keeps mounting on the potential dangers of stevia.

Stevia is promoted as a harmless herbal sweetener that can be used as a healthy replacement for sugar. Since the FDA approval of purified stevia extract as a sweetener and food ingredient in 2008, stevia has found its way into hundreds of food products, medications, and dietary supplements. Many people use stevia as a sweetener in place of sugar and other sweeteners. Others may consume it without realizing it as an ingredient in commercial products. In recent years, stevia’s healthy image has taken a hit as health concerns have surfaced. Doctors and nutritionists are seeing health problems disappear when they instruct patients to discontinue their use of stevia. One such doctor is Joseph Nelson, MD. He began investigating stevia after he began using it and discovered it raised his PSA levels—a marker for prostate cancer. When he discontinued using stevia his PSA levels dropped back to normal.

He began instructing all of his patients with elevated PSA to eliminate stevia. Some claimed they didn’t use the product, but on examination it was found that stevia was an ingredient in their foods or supplements. Once these products were discontinued, PSA levels immediately improved. He found that stevia was also linked to unexplained cases of vertigo, arrhythmias, IBS, and urinary frequency. Removing patients from stevia was all that was needed to see dramatic improvement. Recently, he discovered stevia may also increase the risk of heart disease.

When your doctor orders blood tests one of the markers that may be measured is a hormone called brain natriuretic peptide or BNP. Although the name of this hormone suggests that is associated with the brain, it is not, the name came about because it was originally identified in extracts of pig brain. BNP is secreted by the heart in response to stress and is used as a marker to evaluate risk of heart failure and, to a lesser extent, kidney disease. It is an especially reliable predictor of cardiovascular mortality in diabetics.

Heart failure doesn’t necessarily mean the heart has stopped working, it means it is not working properly so it doesn’t fully support the body’s need for blood and oxygen. Heart failure is serious and is one of the most common reasons for hospitalization of people over the age of 65. Over time, it can get worse and lead to death. Anything that can damage the heat can lead to heart failure including coronary artery disease, heart attack, cardiomyopathy, high blood pressure, and diabetes.

When you have heart failure your heart produces two related hormones: one called B-type natriuretic peptide (BNP) and the other N-terminal-pro-BNP (NT-proBNP). Levels of both hormones increase when heart failure gets worse and decrease when it gets better. A BNP blood test measures these two hormones. NT-proBNP in the range of 125-450 pg/mL is considered normal or mild to moderate stress; a reading above 450 pg/mL is an indication of heart failure or severe stress—not a good sign. Risk of cardiac arrest and death increases with increasing BNP levels.

Dr. Nelson discovered that stevia can have a direct affect on the heart by influencing BNP levels. This was first revealed to him by a patient whose blood test showed a NT-proBNP level of 628 pg/mL—an indication of heart failure. Over the next 6 months the patient pursued the standard drug treatment for heart failure. On the follow-up visit the patient’s NT-proBNP level had risen to 699 pg/mL, showing that her condition was getting worse. This suggested that she was doing something that was continuing to harm her heart despite the medication. On investigation it was discovered that she was using a sweetened energy drink daily that contained stevia. She was instructed to stop using the product. Two months later she had another blood test. This time her NT-proBNP level had dropped to 375 mg/mL—down into the normal range. This change occurred by simply discontinuing stevia, nothing else in her diet or lifestyle had changed.

This is significant because it suggests that stevia may be harmful to the heart. If you have had heart issues or are concerned about the health of your heart, it may be wise to avoid stevia and products containing it. 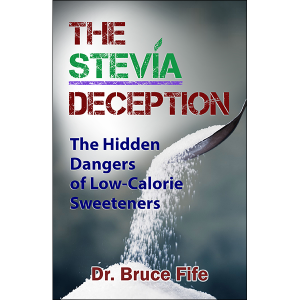