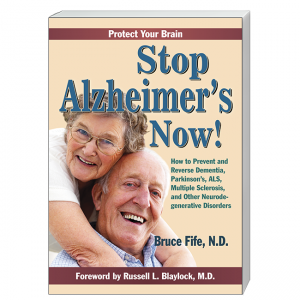 The mere mention of Alzheimer’s, Parkinson’s, Huntington’s, or MS is enough to strike fear into the hearts of anyone who has ever had a loved one diagnosed with any of these degenerative diseases. The effect and emotional aftermath is worse for those who have had to watch a spouse or parent gradually decline into complete helplessness. And still worse is the fact heard all too often, words with a horrible finality: “I’m sorry. There’s nothing we can do.”

While anyone unfamiliar with a drug-free, natural approach to health may find some of these revelations difficult to believe, Dr Fife patiently lists scores of references and studies to prove his claims, as well as cite many case histories from patients and their families who, followed the principles outlined in this book and found success. This book provides an invaluable wealth of information to anyone wishing to avoid the damaging effects of neurodegeneration, as well as something less tangible but equally valuable to the afflicted: hope.

This function has been disabled for Coconut Research Center.