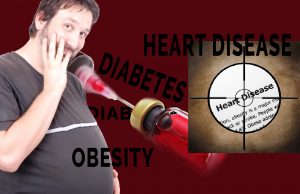 A growing body of evidence is demonstrating that sugar substitutes may be worse for our health than sugar.

Nonnutritive sweeteners are sugar substitutes that provide no calories, therefore have no nutrient value, but are many times sweeter than sugar (sucrose). Because of their lack of calories and high level of sweetness, they have been heavily promoted as harmless or at least safer alternatives to sugar. The most common nonnutritive sweeteners include aspartame, sucralose, saccharin, acesulfame K, and stevia.

The study examined the data from 37 previous studies that tracked the cardiovascular and metabolic health of more than 400,000 people who used nonnutritive sweeteners. The people weren’t losing weight, and the longer studies—which were observing the participants for up to 10 years—noted that they were instead gaining weight, and they were more likely to be obese, have high blood pressure, diabetes, heart disease, and other health issues compared to those who did not use nonnutritive sweeteners (e.g., those who used sugar). In other words, nonnutritive sweeteners had a greater adverse effect on health than sugar.

Why Sugar Substitutes Cause Weight Gain and Other Health Problems

This study substantiates the results of a number of other recent studies.3-5 According to an Australian study published in the journal Cell Metabolism, nonnutritive sweeteners can stimulate appetite, leading to increased calorie consumption of up to 30 percent, thus promoting weight gain and other metabolic problems.6 But that is not all. The University of Sydney researchers found that the chronic consumption of nonnutritive sweeteners promoted hyperactivity, insomnia, glucose intolerance (insulin resistance), a more intense perception of sweetness, and an increase in appetite and in calories consumed.

“We found that inside the brain's reward centers, sweet sensation is integrated with energy content. When sweetness versus energy is out of balance for a period of time, the brain recalibrates and increases total calories consumed,” says Associate Professor Greg Neely, a co-author of the study.

The sweeteners essentially cause the brain to send a message that not enough energy has been consumed, triggering a kind of starvation response that makes food taste even better.

When ordinary sugar is eaten, dopamine is released in the brain and blood sugar levels rise, causing a secondary stimulation to produce dopamine. When eating nonnutritive sweeteners, dopamine produces the initial sensation of pleasure, but the second effect doesn’t occur because sugar-free sweeteners do not increase blood sugar levels. As a result, the body sends signals requesting more food to compensate.

Another study, published in the American Journal of Public Health, found that people who were overweight or obese ate more when they drank nonnutritive sweetened diet beverages. This kind of drink was linked to increased energy intake ranging from 88 calories per day for overweight participants to 194 calories for obese participants.7

Studies have shown that it doesn’t matter what type of nonnutritive sweetener is used, whether it be aspartame or stevia, the effects are essentially the same—weight gain and increased risk of diabetes and other metabolic problems.8 It is the sweetness combined with the lack of corresponding calories, not the particular chemical makeup of the sweetener, that causes the problem. Therefore, any nonnutritive or zero-calorie sweetener will increase appetite and promote weight gain and all of its accompanying problems.

A recent study has shown that nonnutritive sweeteners not only increase the risk of type 2 diabetes but can do so after just a few weeks of use.9

The researchers gave healthy volunteers nonnutritive sweeteners, sucralose or acesulfame K, equal to that of drinking 1.5 liters of diet soda every day. Tests at the end the two week study period revealed that the sweeteners altered the subjects’ glucose metabolism causing elevated blood glucose and insulin levels. The study found that just two weeks use of nonnutritive sweeteners was enough to cause changes in the volunteers’ ability to properly manage their blood sugar, sending them in the direction toward diabetes.

Childhood Obesity Starts in the Womb

In a study published in the Journal of the American Medical Association Pediatrics researchers examined 3,033 mothers and their children. More than a quarter of the women consumed nonnutritive sweetened beverages during pregnancy. There was no association between nonnutritive sweetener use and weight at birth; however, after one year infants whose mothers consumed nonnutritive sweeteners were more likely to be overweight.11 This effect was not due to maternal body mass index, diet quality, total energy intake, or other obesity risk factors. There was no association of increased risk of being overweight if the mother consumed sugar sweetened beverages. The reason for the increased infant weight was attributed to the mother’s consumption of zero calorie sweeteners during pregnancy.

Zero calorie sweeteners are known to alter the gut microbiome, shifting the microbiota toward populations that tend to promote weight gain and metabolic disturbances. During delivery, whatever type of microbiota that inhabits the mother’s digestive tract and birth canal will be passed on to the infant. Therefore, the infant will acquire the type of bacteria that promotes weight gain, leading to weight problems later on.4, 8

As more evidence is accumulating, it is becoming increasingly evident that nonnutritive sweeteners are causing more harm than good and are not suitable substitutes for sugar or other natural sweeteners.