We often hear of the cholesterol pathway to the atherosclerotic lesion, as the impact of dietary fats are often measured by their effects on serum lipids and lipoproteins. However, the platelet pathway is equally, if not even more important.

In the latter pathway, “bad” hemastatic variables such as fibrinogen, factor VII activity (FVIIa), FVII coagulant activity (FVIIc), and plaminogen activator inhibitor type 1 (PAI-1) indicate how nasty dietary fats can get. As these hemastatic variables are more difficult to measure than serum lipids and lipoproteins, it’s no wonder that few studies utilize these determinations.

In the mid-1990s, Dr Sanders from King’s College, London, reported that very high intakes of unsaturated fatty acids such as oleic and linoleic acid put your blood in a hypercoagulable state by elevating postprandial FVIIc. This “bad” effect was comparatively small with the saturated palmitic acid.

Several years later, Danish investigators confirmed that the above dark side of unsaturated fatty acids do exist but only under-reported. In a present study, 6 matching dietary test fats, rich in stearic acid (S), palmitic acid (P), palmitic + myrisitc acid (P+M), oleic acid (O), elaidic acid (trans), and linoleic acid (LA) were provided in random order to 16 young men, and the postprandial lipid and hemastatic profile were measured after 2, 4, 6, and 8 hours. High-fat meals (1g fat/kg body wt), with 43% from the test fatty acids, were served in the morning on 6 separate days.

The lesson here is that a mix of both saturated and unsaturated fats are needed in the diet to promote a favourable thrombogenic state, i.e. one that favours fibrinolytic activity and therefore low arterial thrombotic tendency. In this regard, an excess of unsaturated fatty acids(oleic + linoleic) in the diet may not be a good thing although total cholesterol and LDL-cholesterol are reduced, postprandial activation of “bad” hemastatic factors, particularly FVIIc, can make you take the alternative route to the atherosclerotic lesion! 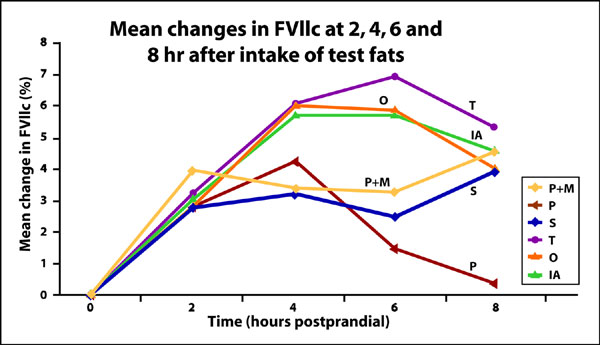