SYDNEY — Australian scientists have discovered an octopus in Indonesia that collects coconut shells for shelter — unusually sophisticated behavior that the researchers believe is the first evidence of tool use in an invertebrate animal.

The scientists filmed the veined octopus, Amphioctopus marginatus, selecting halved coconut shells from the sea floor, emptying them out, carrying them under their bodies up to 65 feet (20 meters), and assembling two shells together to make a spherical hiding spot.

Julian Finn and Mark Norman of Museum Victoria in Melbourne observed the odd activity in four of the creatures during a series of dive trips to North Sulawesi and Bali in Indonesia between 1998 and 2008. Their findings were published Tuesday in the journal Current Biology.

“I was gobsmacked,” said Finn, a research biologist at the museum who specializes in cephalopods. “I mean, I’ve seen a lot of octopuses hiding in shells, but I’ve never seen one that grabs it up and jogs across the sea floor. I was trying hard not to laugh.”

Octopuses often use foreign objects as shelter. But the scientists found the veined octopus going a step further by preparing the shells, carrying them long distances and reassembling them as shelter elsewhere. 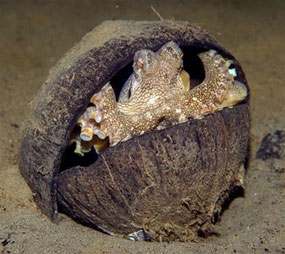 That’s an example of tool use, which has never been recorded in invertebrates before, Finn said.

“What makes it different from a hermit crab is this octopus collects shells for later use, so when it’s transporting it, it’s not getting any protection from it,” Finn said. “It’s that collecting it to use it later that is unusual.”

The researchers think the creatures probably once used shells in the same way. But once humans began cutting coconuts in half and discarding the shells into the ocean, the octopuses discovered an even better kind of shelter, Finn said.

The findings are significant, in that they reveal just how capable the creatures are of complex behavior, said Simon Robson, associate professor of tropical biology at James Cook University in Townsville.

The findings are significant, in that they reveal just how capable the creatures are of complex behavior, said Simon Robson, associate professor of tropical biology at James Cook University in Townsville.

There is always debate in the scientific community about how to define tool use in the animal kingdom, Robson said. The Australian researchers defined a tool as an object carried or maintained for future use. But other scientists could define it differently, which means it’s difficult to say for certain whether this is the first evidence of such behavior in invertebrates, Robson said.

Still, the findings are interesting, he said.

“It’s another example where we can think about how similar humans are to the rest of the world,” Robson said. “We are just a continuum of the entire planet.” ■