Coconut oil has been described as the "healthiest oil on earth." I agree with this statement. No other dietary oil provides as many health benefits as coconut oil. Coconut oil is different from most other oils because it is composed predominately of a unique group of fat molecules known as medium chain triglycerides, otherwise referred to as MCTs.

The unique health benefits associated with coconut oil comes primarily from the MCTs. Coconut oil has a few longer chain fatty acids but consists primarily of MCTs. Coconut oil contains the highest natural concentration of MCTs—63 percent. Palm kernel oil comes in second place with about 53 percent. Butter is a distance third with only 12 percent. After that there aren't many other sources with more than a trace of MCTs. Most dietary oils, such as corn, soybean, and olive oils, have no MCTs at all.

MCTs have long been recognized by medical researchers for their nutritional and medicinal value. To take full advantage of the medical effects of MCTs, coconut and palm kernel oils have been distilled down to produce a product called MCT oil. It is sometimes referred to as fractionated coconut oil. This oil is 100 percent pure MCTs.

MCT oil was first formulated in the 1950s for patients who had trouble digesting fats composed primarily of long chain triglycerides. Since then it has been used as an ingredient in a variety of products including baby formula, medications, dietary supplements, energy bars, and protein shakes, to name just a few. Pure MCT oil is also available as a dietary supplement. 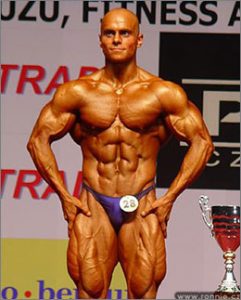 Bodybuilders and fitness enthusiasts have embraced MCT oil as an aid in gaining muscle mass and losing weight. Bodybuilders are constantly dieting to reduce total body fat to around 3-5 percent. This allows for maximum muscle definition. An average healthy man has between 18-24 percent body fat and a woman 25-31 percent. In order to reduce body fat to under 5 percent requires strict dieting. However, reduced calorie diets tend to cause muscle tissue to break down to make up for some of the missing calories. Adding MCTs can supply the body's need for additional energy without breaking down muscle tissue, thus muscle mass is preserved. MCTs also stimulate metabolism and satisfy hunger, which aids in weight loss. In this case, MCT oil is preferred over coconut oil because coconut oil also contains some long chain fatty acids that are considered by bodybuilders to be a source of unwanted excess calories.

Some people may assume that since MCT oil is pure MCTs that it is superior to coconut oil. Both have their advantages and disadvantages. The biggest difference between the two oils is the composition. Coconut oil consists of a mixture of 10 different fatty acids (caproic, caprylic, capric, lauric, myistic, palmitic, stearic, arachidic, oleic, and linoleic acids). Among these, lauric acid accounts for about 50 percent of the total fatty acid content. MCT oil has only two (caprylic and capric acids). It has no lauric acid, perhaps the most important of all the medium chain fatty acids because of its superior antimicrobial properties. Therefore, in terms of fighting off infection, coconut oil would be far superior to MCT oil.

Many people complain that if they eat too much MCT oil, more than a tablespoon or two, they develop nausea, cramping, and diarrhea. This can happen with coconut oil too, but usually requires a much larger dose. So coconut oil is better tolerated. Tolerance can be increased with a gradual increase in dosage over a period of time.

Coconut oil, especially virgin coconut oil, is a natural product that has undergone minimal processing. It retains all of the natural nutrients that combine to make it the "healthiest oil on earth." MCT oil is a product of science—an attempt to improve upon nature. It is a man-made oil, distilled and refined into a purified product. Naturally occurring nutrients such as vitamin E, sterols, lauric acid, and other beneficial fatty acids have been removed. It is an RBD oil, meaning it has been refined, bleached, and deoxidized. This process doesn't necessarily make the oil harmful, but does change it significantly.

While MCT oil may not be exactly like coconut oil, it does have its uses. Because of it high MCT content, it has distinct health advantages over most other dietary oils.  If I had a choice between MCT oil and corn, soybean, safflower, canola oils, or most any other vegetable oil, I would choose MCT oil without hesitation. Like coconut oil, MCT oil is highly stable. It is resistant to oxidation that creates health damaging free radicals.

One of the characteristics of MCT oil that some people see as an advantage is that it is tasteless. It can be combined with foods without imparting a coconut taste or smell. Some people don't like the taste virgin coconut oil can give foods. Like coconut oil, MCT oil can be added to food to enhance its nutritional value. Add it to beverages, soups, stews, casseroles, and salads.

One of the major advantages to MCT oil is its lower melting point. It melts at about 25 degrees F (-4 C), so it will remain liquid even if refrigerated. Coconut oil, on the other hand, melts at 76 degrees F (25 C). In temperate climates it remains solid most of the time. One of the difficulties with combining coconut oil with cold foods is its high melting point. When mixed in cold beverages or poured onto chilled salads coconut oil immediately hardens. MCT oil, however, doesn't. MCT oil can be mixed into cool beverages and foods and remain liquid.

MCT oil can be made into a variety of oil based salad dressings. It also makes an excellent mayonnaise. Just about all commercial brands of mayonnaise are made using unhealthy polyunsaturated oils. Coconut oil can be made into mayonnaise too, but it is only good for immediate use. If it is stored in the refrigerator it hardens and becomes unappetizing. MCT mayonnaise remains soft and can last for a couple of weeks when refrigerated.

MCT oil can be useful as a means to increase total MCT consumption even in a diet that already includes coconut oil as its primary source of fat. For some recipes, MCT oil may be more convenient or palatable than coconut oil. See the recipes below.

MCT oil is available at most health food stores and online. One good source is Alpha Health (www.alphahealth.ca). Like coconut oil, it does not need to be refrigerated and has a shelf life of many months. ■ 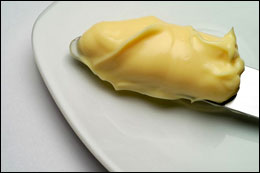 Combine egg yolks, vinegar, mustard, paprika, salt, and ¼ cup coconut oil into a blender or food processor. Blend for about 30 seconds. While machine is running pour in the remaining coconut oil followed by all of the MCT oil very slowly in a fine steady stream. The secret to making good mayonnaise is to add the oil slowly. Mayonnaise will thicken as oil is added. Taste and adjust seasoning as desired. 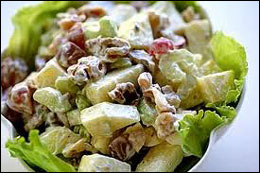 Cut apples and sprinkle lemon juice over them. The acid in the lemon juice prevents the apples form turning brown. Mix all the ingredients together in a medium sized bowl until evenly mixed. Serve on a bed of lettuce.

Combine all ingredients into a jar with a tight fitting lid, such as a Mason jar. Shake well and serve. Store in the refrigerator.

Combine all ingredients into a jar with a tight fitting lid, such as a Mason jar. Shake well and serve. Store in the refrigerator.

1/3 cup of slivered or sliced almonds

*You may use other fruit flavored vinegars as well, such as black cherry or pomegranate. If fruited vinegar is not available you can substitute apple cider vinegar. 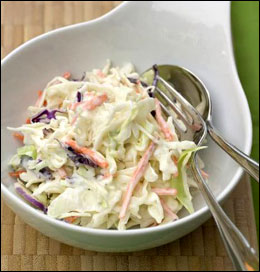 Put dressing ingredients in a jar with tight fitting lid and shake until well mixed. Pour over shredded slaw and toss well. Toss before eating. Store in the refrigerator.