Chugging down the track, you overtook me, minding my own business, doing eight year old things, it was like you zapped me inside my tiny little body. I became extremely dizzy; the right side of my body went limp and impossible to use.

You pushed me backwards and the hard floor caught me. A scream came from deep inside me but it was trapped inside my brain unable to escape my lips. You caused me to be alone, you taught me what true loneliness is. You forced me down a dark tunnel where I could hear but I was silenced. There was nothing but blackness all around me I could hear you Epilepsy…..the sound of a train in the distance, it was you and you were coming fast. Lying in the darkness, I felt you run through me. The Train…yes you Epilepsy came to a painful stop, leaving me with a pounding sledge hammer in my head. Emerging from the tunnel, I heard my mom’s voice say, “Jade, it’s okay now.”

In the summer of 1987, I had my first seizure a month shy of my eighth birthday. In the Spring of 1988 I went in for a brain biopsy that determined I had a scar on the left side of my temporal lobe and I was officially diagnosed with epilepsy. 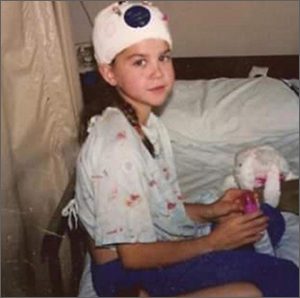 Jade in the hospital at the time of her diagnosis.

These days, I think a lot about how my mum felt. I was diagnosed so young it didn’t feel like the end of something for me, it simply was a part of me and I didn’t know life before epilepsy. The only thing I knew was that “I just wanted to be normal.” In the beginning, my mum worried and was always watching. I think she was afraid I would have a seizure and fall and hurt myself or maybe even die. I recently talked with my mum about my epilepsy. She said, “I remember one day when I was telling you to be careful and you looked at me and said ‘mum I just want to be normal’ and it broke my heart. From that point on, I had to trust that everything would be okay and allow you to live your life. If something did happen, I knew that you were doing what you loved.”

I was so lucky to have a family that never held me back and believed I was just as capable as anyone. I was also so lucky to have a mother who was a nurse and made sure I was well educated on my diagnosis and my medications and that it wasn’t something to keep quiet but to understand. Her gift of self-empowerment through knowledge continues to be a cornerstone of how I live.

I struggled at different stages in my life due to my epilepsy. While in elementary school I become fearful that I would have a seizure and the teachers wouldn’t know what to do, so I stopped going to school. That fear went on for six months until the day the truant officer came to my house and said, “If you don’t go to school you will be taken away from your family.” Only the fear of being taken from my family outweighed the fear of a seizure. The next day, my dad drove me to school. As he pulled up to the front, I sat in the car battling the voice inside my head and the deep sick feeling in my gut. Then the car behind us honked its horn. To this day I am not sure what really made me do it but I jumped out of the car and went to school and that fear was gone. From that day forward I was stronger than the fear of having a seizure. I had only the choice to move forward and know it would be okay whatever happened. Over the next 20 years I would face judgement, other people’s fears, personal embarrassment, and various challenges. My parents helped stand up for me and fight those judgements until I was able to do it for myself. Each of those experiences made me stronger and more determined to show the world that epilepsy would not define me but drive me to change myself and the world.

Over the years I changed medications, usually due to the fact that they stopped controlling my seizures or the side effects were too great. I have been on phenobarbital, Tegretol, Gabitril, Lamictal, Carbatrol, Keppra, Vimpat, Zonisamide, Ativan, and Kolonipin. I was told by doctors I would always have to be on medication. The side effects of these medications affected me greatly. I required 10 hours of sleep, learning was a challenge, I had constant headaches, and felt like I was on an emotional roller coaster. Being diagnosed so young and being placed on medication early, the side effects felt normal to me. It makes me so sad to say that, but it was true, I didn’t know anything different. When I got older, my biggest worry about my medications was cost. Over time, I began to think more about what it was doing to me, and then five years ago I began dreaming of what being off medication would feel like. I wondered, would my personality be different? Would my stomach not always feel sick? Would I sleep better? The list went on and on.

In 2014, after being seizure-free for 3 years, I had a seizure at swim practice. I had been struggling with auras and my medication was becoming really expensive even with insurance. So, I made the decision to change medications and I went with the generic Zonisamide, knowing full well that generics had a 20 percent variance and had caused issues of breakthrough seizures (increased seizure activity after a period of stability) for me when I was younger. We began the titration process and over the next year I battled side effects like I had never experienced. By the fall of 2015, I was diagnosed with gastritis. I had lost 25 pounds and my doctor diagnosed me as underweight.I also suffered from brain fog, mood swings, depression, and fatigue. Each morning was a struggle to get out of bed. I had to cut back on work. I cried daily. At this point, I was ready to give in to my epilepsy and simply give up. Spending my whole life fighting a diagnosis with medications, that felt like they were killing me, was just too much. I was beyond tired of living this life with epilepsy. In spite of all this, deep down I knew I was luckier than some with my diagnosis and I did have various times in my life that I was seizure-free, but the medication side effects were hard and I wanted so badly to not need them. I was in despair.

In late 2015, I received a call from my younger sister saying, “You need to look into the ketogenic diet.”This is where my life was about to change. My dream of being off medication and the opportunity to finally see what it was like to live a normal life, just might be possible. But I was going to have to make drastic changes to my diet and lifestyle and I wondered if I was ready.

I was aware of the ketogenic diet but had not considered it viable for me because I thought of it as something for children; I was now in my mid-30s. But I was at rock bottom and willing to do anything. I went and saw my neurologist and told him I wanted to be on the ketogenic diet and requested to be taken off Zonisamide and stay on only Carbatrol and Vimpat. He sent me away with a titration schedule to take me off Zonisamide and a link to the Charlie Foundation website, to learn more about the diet. I was told to eat no more than 50 grams of carbohydrate a day and as much protein as I wanted. For the first time in a long time, I felt hopeful and I was ready “to heal myself.” Little did I know it was going to take more than the scant information he provided.

I spent the next year figuring it out. Each morning I spent hours researching online. My husband found apps to help me, I ordered books, looked at websites, listened to podcasts, and created a social media account to look for others who were using the ketogenic diet for epilepsy. The issue I came up against was there were not that many adults using keto to control their seizures.

Eventually, I came across a woman using the ketogenic way of eating to control her seizures. We started talking weekly on the phone and texting. Her support helped me get through the early days. She helped quell my fears of having high enough ketones to control seizure activity. She constantly reminded me that I still had a life to live and didn't need to worry and focus on my food all the time. When I hit my year mark on the diet, I finally found a dietician who added additional guidance. Having my family and a community to support me made surviving this journey possible but it wouldn’t have happened if I wasn’t willing to do the work and realizing it was not just a diet but a lifestyle.

Committing to this lifestyle did more than just control my seizures, it set me free. I’ve created a new relationship with food and I have become a fantastic cook. I started my own business that focuses on whole body care and personal empowerment and I work with companies that encourage a healthy lifestyle. I am driving now, something I had chosen in the past not to do until my seizures were under better control. I am still on two medications, Carbatrol and Vimpat, but I am on the least amount of medication in my life.

I have found peace within myself. Physically, I feel amazing! I sleep better, no longer feel constantly sick to my stomach, and my headaches have lessened greatly. I feel good mentally and emotionally too. I no longer have brain fog, my moods are even, I smile more, and my world has truly opened up. My view of the world no matter what it throws at me is manageable now. 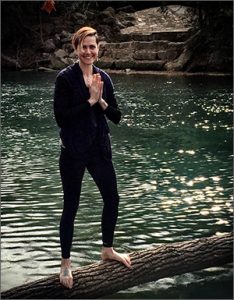 Epilepsy doesn’t hold me back anymore and making the decision to use the ketogenic diet to heal myself has become the driving force behind my larger goal of changing the lives of those around me for the better. My dream of educating, sharing my story and empowering individuals to not let their diagnoses define them is a reality for me.

I thought the ketogenic diet was the end of my journey of healing but it has become my new beginning—a beginning that can, in time, allow me to become completely medication free and be able to help others find the success that I have.

To learn more about Jade go to https://jadenelson.net/ or Instagram: @thetraininsideme.