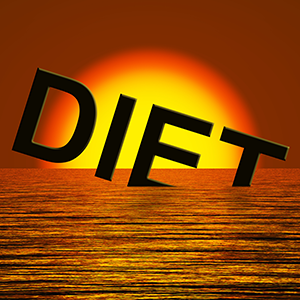 If you’ve ever tried to lose weight on a low-fat diet you know how difficult it can be. Not only is total food intake severely restricted, but every morsel of fat is to be avoided at all costs. Fatty chicken skin is removed, any fat on lean cuts of meat is carefully trimmed off, fat-free egg whites are chosen over whole eggs and low-fat and non-fat milk, yogurt, and cheese become your preferred choice. You carefully count every calorie that passes through your lips. Foods devoid of fat taste bland and unappetizing, so they are often enriched with additional sugar to make them more palatable.

After months of struggling and suffering with hunger and lack of energy and feelings of depravity, you eventually end your diet. You may have lost some weight, or may have even reached your goal weight, but once your "diet" is over, old eating habits return. Before long you have regained all the weight you had lost and added on a few extra pounds to boot. In order to lose this excess weight you have to go back on a diet and repeat the whole process over again. But unfortunately, the results are the same—you struggle for months to lose some weight but before long it all returns. Ultimately the diet was a failure.

This was the conclusion of a recent study published in the American Journal of Public Health. Researchers at King’s College in London found that the chance of an obese person attaining normal body weight is 1 in 210 for men and 1 in 124 for women, increasing to 1 in 1,290 for men and 1 in 677 for women with severe obesity. The findings, reveal that current weight management programs focusing on low-fat dieting and exercise are not effective in tackling our growing overweight epidemic.

The research, funded by the National Institute for Health Research (NIHR), tracked the weight of 278,982 participants (129,194 men and 149,788 women) using electronic health records from 2004 to 2014. The study looked at the probably of obese patients attaining normal weight or a 5 percent reduction in body weight; patients who received bariatric surgery were excluded from the study. A minimum of three body mass index (BMI) records per patient was used to estimate weight changes.

Body mass index is a numerical value derived from the weight and height of an individual. BMI is a much more accurate means to measure how fat or thin a person is than by weight alone. The BMI is an attempt to quantify the amount of fat, muscle, and bone a person has. A tall lean person can weigh a lot more than a short fat person, so height is a critical component in judging a person’s mass.

The most recent figures on obesity in the USA say that 39 percent of the population is now obese. America is not alone. The obesity epidemic is felt worldwide. The waistlines of people all over the world are expanding.

What is your BMI? You can calculate your BMI using the following formula:

If you use pounds and inches you need a conversion factor of 703 and the formula is:

The researchers in this study found that for those people who achieved 5 percent weight loss, 53 percent of them regained this weight within 2 years and 78 percent regained their lost weight within 5 years. These results correlate with previous observations that had estimated that as many as 95 percent of those people who go on low-fat diets to lose weight regain all their weight after 5 years.

Overall, only 1,283 men and 2,245 women in the study with a BMI of 30-35 reached their normal body weight, equivalent to an annual probability of 1 in 210 for men and 1 in 124 for women; for those with a BMI above 40, the odds increased to 1 in 1,290 for men and 1 in 677 for women with severe obesity. The study concluded that current obesity treatments are failing to achieve sustained weight loss for the vast majority of obese patients.

Dr. Alison Fildes, one of the authors of the study, said, "Losing 5 to 10 percent of your body weight has been shown to have meaningful health benefits and is often recommended as a weight loss target. These findings highlight how difficult it is for people with obesity to achieve and maintain even small amounts of weight loss."

The standard approach to treat overweight and obesity is to go on a low-fat, calorie restricted diet and to increase physical activity. This approach is based on the outdated theory that all calories are the same—the source of the calorie has no effect. Lowering total calories will result in weight loss regardless of the type of food consumed. Fat contains more than twice as many calories per gram as carbohydrate or protein. Consequently, most weight loss diets focus on reducing the fat in the diet to allow as much carbohydrate and protein as possible. This approach has proven to be a dismal failure.

Removing fat from the diet has doomed these diets to fail. The reason is that a healthy amount of fat is necessary in the diet to achieve optimal health and weight. There are several reasons for this, let me mention just three:

Studies have shown that when people eat high-fat, low-carb diets they lose more weight than those who eat a low-fat diets. One study had half the participants consume a high-fat diet consisting of 90 percent fat with a total of 1,000 calories per day. A second group of participants went on a total fast, consuming nothing but water, 0 calories per day. After 10 days the group consuming the high-fat 1,000 diet lost twice as much weight as the group that ate nothing at all. These and other similar studies are described in greater detail in my book The Coconut Ketogenic Diet.

One of the main reasons why we are experiencing an obesity epidemic today is because for the past 30 years or so we have been told to avoid fat and eat lean. Weight loss diets stress the removal of fat from our plates—just the opposite of what you should be doing to lose weight. Coconut oil is an ideal fat for weight loss as it has been shown to satisfy hunger and promote body fat reduction.

If you want to lose excess weight, forget the typical low-fat diets. You will have far greater success eating more fat in conjunction with a low-carb diet.  ♦ 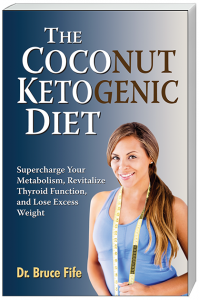