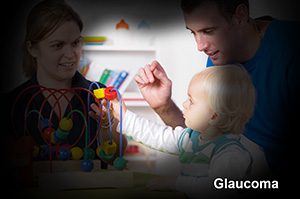 Joe Lovett was floored when he received the news from his doctor—glaucoma. At that point his world was shaken. Glaucoma is a degenerative eye disease characterized by the gradual loss of peripheral vision that can progress to tunnel vision and eventually complete blindness.

Joe was a successful director and filmmaker living in New York City. In the 1980s he was the producer for ABC News 20/20 program with Hugh Downs and Barbara Walters. After leaving ABC News in 1989, he founded his own company, Lovett Productions, producing documentaries highlighting social and health issues.

In his early 20s Joe's eye doctor told him his intraocular eye pressure was slightly elevated but that he did not have to worry. So he didn't. Intraocular pressure is the pressure of the fluid inside the eye. It wasn't until he was in his early 40s that another doctor expressed concern about the abnormally high eye pressure and sent him to an eye specialist—an ophthalmologist—who could give him a definite diagnosis. Joe was told he had glaucoma.

Elevated fluid pressure inside the eye is the most characteristic feature of glaucoma and is the first sign of the disease. It is believed that the excessive intraocular pressure pushing on the retina and optic nerve at the back of the eye causes them to degenerate. There is no cure for glaucoma and standard treatment focuses on reducing eye pressure to slow down and hopefully stop the progression of the disease. Joe was given medicated eye drops to help keep his eye pressure under control.

"I started in the traditional way with eye drops but didn't take it too seriously," says Joe. "At that time, I thought glaucoma meant that if you use the eye drops you'll be fine. Not necessarily!"

Although tests indicated the he was seeing well enough straight ahead, his side or peripheral vision was degenerating and his vision was getting worse.

"One evening I was out walking when a man suddenly appeared in front of me. It was, as they call it, a classic 'jack-in-the-box' moment: one minute my view was clear and the next minute, he popped suddenly into the middle of my field of view." Joe shared this experience with his doctor and who immediately referred him to a vision therapist.

"The vision therapist had me stand across the room from her and asked me to focus one eye on her nose and tell her how much of her body I could see. I couldn't believe what I saw. She only existed above the shoulders and below the hips. Her torso wasn't there. I literally felt sick. It was the first time the reality sunk in."

The therapist explained that the unconscious scanning of his eyes and visual memory probably kept him from noticing the blind spots. She showed him where the holes in his vision were and taught him, for safety reasons, how to consciously scan his entire field of vision and bend his neck and look down at every doorway. "I was devastated," Joe said.

The blind spots explained why he often tripped when walking through a doorway or up dimly lit stairs. He is still able to get around reasonable well by himself. He can read, but he can only keep three to five words in focus at a time. It's a struggle.

Despite medications and surgeries to reduce the eye pressure, Joe has lost a third of his visual field. "Supposing I lose all my vision," Joe wonders, "what do I do?"

Losing your eyesight can be devastating. We depend on sight for so many things in our lives, that to be without it can be horrifying. Nearly half of all adults worry more about vision loss than about losing their memory or their ability to walk or hear. Among the elderly, vision loss is their greatest fear next to death.

Glaucoma is the second most common cause of blindness worldwide (cataracts is the first). It is estimated that 1 out of every 120 people have glaucoma. Risk increases with age.

Glaucoma is often called the "sneak thief of sight" because it creeps up without warning and by the time it is detected, substantial vision may already be lost. Since there are few symptoms in the early stages, many people have the disease without knowing it. It is estimated that as many as half of those with glaucoma are not even aware of it. Symptoms are subtle, however, there may be some hazy vision and mild discomfort in the eyes and later a barely noticeable loss of peripheral vision. As the disease progresses there is reduced visual acuity and greatly increased fluid pressure that can cause the appearance of colored rings or halos around bright objects. Glaucoma can develop in one or both eyes.

There is no medically recognized cure for glaucoma. Treatment focuses primarily on reducing pressure and may include medicines, laser therapy, surgery, or a combination of any of these. While these treatments may save remaining vision, they do not improve sight already lost from glaucoma. This is why early diagnosis is very important.

Anybody can develop glaucoma. We are all at risk. While elevated fluid pressure in the eye is often associated with the disease, the actual cause is unknown. Lowering fluid eye pressure can slow down the progression of the disease, yet in some cases it doesn't. Some people who develop glaucoma have normal eye pressure and lowering pressure has not proven to be beneficial. Elevated pressure may be a symptom rather than the initiating factor.

Many researchers now view glaucoma as a neurologic disorder that causes nerve cells in the brain to degenerate and die, similar to what occurs in Parkinson's disease or Alzheimer's.

When light enters the eye it is focused on the retina—the light sensitive nerve cells lining the back of the eyeball. The retina transforms light energy into a nerve impulse and sends the signal through the optic nerve to the brain where visual images are processed and interpreted. The eyes are actually a part of the brain. During fetal development, the brain pooches out to form the eyes.

Many researchers now view glaucoma as a neurologic disorder that causes nerve cells in the brain to degenerate and die, similar to what occurs in Parkinson's disease or Alzheimer's.1 Chronic inflammation, characteristic of all neurodegenerative disorders, is now becoming recognized as an important factor in glaucoma. In Parkinson's disease the area of the brain called the substantia nigra, which controls movement, is affected most. In Alzheimer's it is the hippocampus and frontal lobes, areas which involve memory. In glaucoma it is the eyes.

While intraocular pressure is an important diagnostic tool and reducing abnormal pressure is still the standard form of treatment, researchers are looking at new approaches. One of these approaches is to take advantage of the body's own healing mechanisms such as brain-derived neurotrophic factors (BDNFs).

BDNFs play a key role in regulating survival, growth, and maintenance of neurons. They regulate the neurotransmitters (e.g., dopamine, glutamate) that carry chemical signals, which They protect neurons from the detrimental effects of various toxins and stressors that can harm brain and nerve tissue.5-6 BDNFs help to support the survival of existing neurons and encourage the growth and differentiation of new neurons. BDNFs play a significant role in the maintenance of brain and eye cell function throughout an individual's lifetime.

Initial studies using rats with glaucoma have shown that when BDNFs are injected into the eyes, retinal cell degeneration and loss abruptly declines.7 However, the effect is only temporary. Multiple injections are necessary for significant beneficial effect, reducing the clinical usefulness of this approach. A continuous supply of BDNFs is needed in order to have a beneficial outcome. While injecting BDNFs may not be practical, raising and sustaining blood levels of BDNFs naturally is very doable. The key is to boost blood ketone levels.

The brain uses glucose as its primary source of fuel. Whenever we eat a meal, much of the food is converted into glucose and released into the bloodstream. However, if we don't eat for several hours or we don't eat any foods that can be converted into glucose (primarily carbohydrates), blood glucose levels begin to fall, as they do, the liver starts producing ketones from stored fat. Ketones act as an alternative source of fuel for the brain. If you eat two or three meals a day, blood ketone levels are normally kept fairly low. Blood ketones can be raised by prolonged fasting or by eating a very low-carb or ketogenic diet.

Ketones are known to stimulate the production of BDNFs. Consuming a ketogenic diet can raise BDNFs to levels that can have therapeutic effects on the brain and the eyes.

Consuming a ketogenic diet can raise BDNFs to levels that can have therapeutic effects on the brain and the eyes.

Combining coconut oil with a ketogenic diet enhances the production of ketones and BDNFs, improving their therapeutic effect. If a ketogenic coconut oil-based diet is maintained for a period of time, it can allow the time needed to bring about healing and repair within the central nervous system. Ketones have proven to be successful in reversing Epilepsy, Alzheimer's, Parkinson's and other neurodegenerative diseases.9-12

The eyes are also part of the central nervous system and can be protected with ketone-induced BDNFs. In animal studies where the retina and optic nerve are intentionally injured, BDNFs have proven to lessen the damage and stimulate healing and regrowth of these tissues, preserving eyesight.13 This has some very pronounced ramifications. It means that, despite what you may have been told, degenerative eye diseases like glaucoma are not necessarily irreversible.

I reversed my own glaucoma using coconut oil.

I was able to reverse my own glaucoma using coconut oil. Eighteen years ago I was diagnosed with glaucoma. I didn't go on medication but changed my diet and started using coconut oil in place of other vegetable oils.

Two years later I was pronounced glaucoma-free. I've been tested every few years since and still no sign of glaucoma or loss of vision. In fact, my vision has improved since the initial diagnosis. The details of my story are in the book Stop Vision Loss Now!: Prevent and Heal Cataracts, Glaucoma, Macular Degeneration, and Other Common Eye Disorders.14 Of course, prevention is always much easier than treatment. An easy way to help prevent vision loss is to add coconut oil into your daily diet. I recommend adding 1-3 tablespoons of coconut oil daily to your meals. You can use the oil in cooking and baking or add it on afterwards. There is more to preserving and restoring eyesight than just eating coconut oil. A healthy diet is also essential along with avoiding troublemakers like tobacco smoke, certain drugs and food additives, and excessive sugar and refined carbohydrates. ♦ 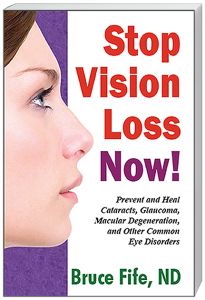