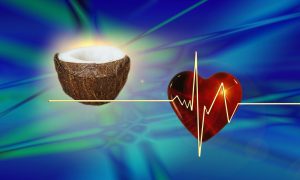 A new study has the AHA up in a tizzy, just months earlier they issued a “presidential” report outlining their stand against saturated fats. This new study casts doubt on the validity of their dietary recommendations. Evidence is mounting that following the AHA’s dietary advice is the quickest way for you to die of cardiovascular disease, not prevent it.

There is a love-hate relationship between coconut oil and the medical community. Many doctors and nutritionists extol it for its many healthy benefits. Bestselling author Dr Joseph Mercola claims that coconut oil is the healthiest oil you can eat. Neurologist Dr. David Perlmutter, the author of Grain Brain, recommends coconut oil as a means to improve brain health. Dr Mark Hyman says it as a health food and weight loss aid in his bestselling book Eat Fat, Get Thin.

However, others claim that its high saturated fat content makes it unhealthy. Saturated fats, they say, raise blood cholesterol, which in turn, increases the risk of heart disease. The American Heart Association (AHA) has been leading the attack against coconut oil. In a widely publicized report published in 2017 the AHA took a stand against all saturated fats, including coconut oil. They condemned saturated fats as a major risk for heart disease and recommend polyunsaturated vegetable oils as a healthier choice.

As soon as the report was released the media went wild churning out reports condemning coconut oil as one of bad fats, further perpetuating the myth that coconut oil and other saturated fats are unhealthy.

Let’s assume that cholesterol is as important as the AHA claims it is in determining heart disease risk, does that make coconut oil dangerous?

While some saturated fats do raise total cholesterol, they also tend to raise HDL cholesterol—the so-called good cholesterol that is believed to reduce the risk of heart disease. In fact, the rise in total cholesterol is due, in part, to the increase in HDL—which is a good thing.

So, does coconut oil improve or worsen cholesterol values?

To cut through all the rhetoric of the opposing viewpoints producers at the British Broadcasting Corporation’s television series “Trust Me I’m a Doctor” decided to sponsor a study to get to the bottom of the controversy. The Trust Me team contacted Kay-Tee Khaw, MD, PhD and Nita Forouhi, MD, PhD, both eminent researchers at the University of Cambridge to conduct the study.

A total of 94 volunteers, age 50 to 75 who had no history of diabetes or heart disease, were recruited to participate in the study. The volunteers were randomly assigned to one of three groups, with each group assigned to add one of the three fats into their diet. Every day for four weeks, they were asked to consume 50 grams of their assigned oil—that’s equivalent to about 3 tablespoons.

Before starting on their new high-fat regime blood samples were taken to get baseline measurements, focusing mainly on their LDL and HDL cholesterol levels. LDL cholesterol is often referred to as the “bad” cholesterol as it makes up most of the cholesterol in our blood.

As expected, the butter eaters saw an average rise in their LDL levels of about 10 percent, which was almost matched by a 5 percent rise in their HDL levels. Taken together the overall effect has a negligible effect on heart disease risk.

Those consuming olive oil had a small, non-significant reduction in LDL cholesterol but saw a 5 percent increase in HDL, supporting its health healthy reputation.

The big surprise was coconut oil. Not only was there no rise in LDL levels, which was what the researchers were expecting (and what the AHA claims it would do), but there was a particularly large rise in HDL, by an impressive 15 percent. The people consuming the coconut oil had significantly reduced their risk of suffering a heart attack or stroke.

The researchers were surprised by the results. Dr. Khaw confessed that she didn’t understand why coconut oil provided better numbers than even olive oil. “I have no real idea,” she said. “Perhaps it is because the main saturated fat in coconut oil is lauric acid and lauric acid may have different biological impacts on blood lipids to other fatty acids. The evidence for that comes mainly from animals, so it was fascinating to see this effect in free-living humans.”[1]

This study provided further evidence that people consuming coconut oil are at reduced risk of developing heart disease, despite claims from the AHA who base their prejudice of coconut solely on its saturated fat content and not on actual studies.

This is not the only study to show that coconut oil reduces the risk of heart disease. Animal studies have clearly shown that coconut oil has the potential to reduce atherosclerosis and prevent, and perhaps even reverse, cardiovascular disease.[2-3]

Although the AHA recommends polyunsaturated vegetable oils as a healthier choice over coconut oil, human clinical trials show that in comparison to polyunsaturated oil, coconut oil does not promote cardiovascular disease even after long-term use.[4]

Taken together, these studies strongly support the cardioprotective nature of coconut oil. No drug, dietary supplement, herb, or low-fat diet has been able to match the combined cardioprotective effects obtained from the regular use of coconut oil. If coconut oil was a pharmaceutical product invented in a chemist’s laboratory it would be promoted as the world’s most effective cardioprotective agent of all time. But since it is a natural product that cannot be patented and exploited and since it competes with a multitude of highly profitable drugs, it is condemned as dangerous.

These and many additional studies not referenced here were suspiciously ignored by the AHA’s report on saturated fats. Was this just a negligent oversight, or was it a preconceived plan to bury studies that conflict with the AHA’s viewpoint? Since the committee members who determine the AHA recommendations are all established academics, it appears it wasn’t due to shoddy research, but more likely a conflict of interest—a common problem when non-profit organizations take money from big businesses that have an interest at stake.

The AHA’s overemphasis on cholesterol as the major contributing factor to heart disease and lack of acknowledging the importance to other factors, such as excessive sugar consumption, could be leading us in the wrong direction. If the AHA’s dietary advice is really accurate and effective, the directors and officers of the AHA would surely be following their own guidelines religiously. You would definitely expect the president of the AHA, Dr John Warner, a cardiologist, to have incorporated his organization’s guidelines into his own life and, consequently, have the lowest risk of heart disease of anybody. That is, if the guidelines were anywhere near accurate.

Ironically, just months after the AHA pronounced their stand against saturated fats, Dr. Warner suffered a massive heart attack.[11] He was only 52 years old. Warner survived the incident, but he could have easily died. In the US life expectancy for men is 79 years, if he had died it would have been 27 years prematurely. The president of the AHA could not avoid a heart attack by following his own dietary recommendations, so what good are they to us? The AHA’s dietary advice is obviously seriously flawed. It appears that if you want to die early from heart disease you should be following the AHA’s dietary recommendations. If you want to prevent a heart attack, you should be using coconut oil.