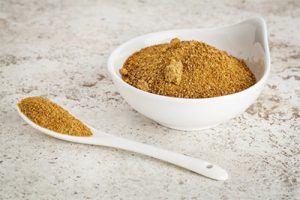 Our bodies use glucose, fatty acids (fats), and ketones as their primarily sources of fuel. We get glucose primarily from the carbohydrates in our foods. When you eat a meal, these carbohydrates are converted into glucose and released into the bloodstream. As a consequence, your blood sugar (glucose) levels rise.

If you don’t eat for a period of time or if you don’t eat carbohydrate-containing foods, your blood glucose levels become low. In order to supply the energy your cells need, stored fat is released as fatty acids. Some of these fatty acids are converted into alternative forms of fuel known as ketones. The body uses fatty acids and ketones to produce energy just as it does glucose. Ketones are of special interest because they provide much more energy than glucose and are required by the brain in the absence of glucose. Fatty acids cannot supply the brain with energy, it must have either glucose or ketones. When you go on a ketogenic diet, you severely restrict carbohydrate consumption, so blood glucose levels remain perpetually low (but not hypoglycemic), compelling the body to release fat and produce ketones. When this happens a person is said to be in ketosis, sometimes also referred to as nutritional ketosis because it is induced by the diet.

Carbohydrates are found in various quantities in foods. Starch and sugar are pure carbohydrate. Fiber is also a carbohydrate but the carbohydrate molecules are bound in such a way that our bodies cannot break them down; so they pass in and out of the body without providing any significant amount of calories, nor do they contribute to the carbohydrate load on the body. Some foods are rich in starch and sugar, such as breads and grains (wheat, rice, oats, corn), potatoes, beans, fruits, juices, and most processed convenience foods (chips, cakes, donuts, candy, soda). Most vegetables are relatively low in carbs, being composed primarily of water and fiber.

Foods are assigned a number between 0 and 100 on the glycemic index scale. The number assigned to each food is determined by how quickly the carbs in that food raises blood glucose. The smaller the number, the less impact the food has on your blood sugar levels.

The glycemic index values are determined experimentally by feeding human test subjects a fixed portion of the foods (after an overnight fast), and subsequently extracting and measuring samples of their blood at specific intervals of time. Glucose, taken orally, is very rapidly absorbed into the bloodstream and is assigned a glycemic index number of 100. All other foods are compared to pure glucose, with GI numbers between 0 and 100. A food that does not raise blood sugar at all has a GI of 0. Coconut oil has a GI of 0.

The presence of fat, protein, fiber, and acid (such as citric acid, lemon juice, and vinegar) in foods lower the glycemic index. Most foods are a combination of carbohydrate, fat, protein, fiber, and acid, so you can’t tell what the glycemic index is unless it has been tested. For example, when sugar (sucrose) is combined with other food ingredients such as a cream, nuts, and guar gum (a fiber used as a thickening agent), to make ice cream, the GI will be lower than the sugar alone.

Coconut or palm sugar is produced from the sap of the coconut palm. It is much like the sap of a maple tree from which we get maple syrup and maple sugar. When a coconut flower begins to bud, it is cut, causing it to drain sap. The sap is collected and dehydrated. As the water is evaporated, it forms sugar crystals rich in vitamins, minerals, and proteins. Glycemic index testing carried out at the University of Sydney has determined that the glycemic index of coconut sugar is 54, not the 35 you often see quoted on the Internet. A GI of 54 is still relatively low in comparison to other forms of sugar.

The higher the GI, the greater the impact on blood sugar levels a food has, and generally the more undesirable or incompatible it becomes to a ketogenic diet. The GI is divided into 3 major levels:

Generally, foods that have a low glycemic index are more keto-friendly.  In other words, they are less likely to prevent or interfere with the production of ketones. There are many types of sweeteners and they each affect GI slightly differently. Coconut sugar and maple sugar fit into the “good” category of 55 or less. Below is the GI of some common sweeteners. 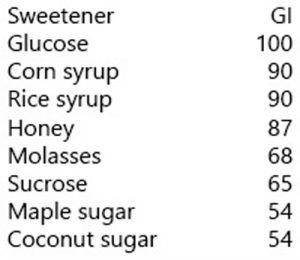 The rate at which the liver produces ketones is influenced not only by dietary carbohydrates and blood glucose levels, but also by the way certain food components are digested and metabolized. Non-caloric sweeteners like aspartame and stevia have virtually no effect on blood glucose levels because they are normally used in such small quantities that they contribute an insignificant amount of calories. However, they do affect metabolism and hormone balance which can arrest ketone production, independent of blood sugar levels. For example, just a few drops of stevia in a single meal can kick a person out of ketosis. You can eat a whole teaspoonful of coconut sugar and not get this big of an effect.

I do not recommend eating coconut sugar often when on a ketogenic diet. But you could use a little now and then. And you must keep track of the total amount of grams of carbohydrate you consume so that you don’t overdo it. The danger of using too much coconut sugar, like any other sweetener, is that the sweet taste can become addictive. So it is best saved for special occasions.

In ketogenic diets for children, a cream drink is often added to meals to boost the fat content of the meal. This drink is typically made using heavy cream, MCT oil, artificial sweetener, and sometimes flavorings. MCT oil is used instead of coconut oil because it will remain liquid when combined with chilled cream. Some type of artificial sweetener, such as aspartame or Splenda, is added to make the beverage more palatable. The problem with this drink is that although the artificial sweeteners supply no calories, they are anti-ketogenic and will reduce the body’s ability to produce ketones. A little coconut or maple sugar can be used instead, making it far more compatible with a ketogenic diet.

If you include this beverage with a meal, you will have to limit the rest of the meal to no more than 4.5 grams of carbohydrate; that would be about the equivalent amount of carbohydrate in 1 medium carrot or 1 medium bell pepper. So you see, you cannot use too much coconut sugar or it will quickly eat up your allotted carbohydrate for the day.

This recipe produces a high-fat, mildly sweet drink that could be used in a ketogenic diet. Only a small amount of coconut sugar (1/2 teaspoon per serving) is used so as to keep it compatible with a ketogenic diet.

Store any leftover drink in the freezer in individual serving sizes; small paper cups work well for this. Slightly thawed and stirred, this beverage transforms into a keto smoothie.